According to a report by Premium Times, suspected Boko Haram men yesterday May 26th attacked villages in the rocky mountains of Gwoza town of Borno State, killing 9 villagers and setting various houses and churches in the area ablaze. Reports say the men hoisted their flag at Ashigashiya ward of Gwoza LGA, a place they now claim is their headquarters.

Speaking to newsmen, a local government official, Nglamuda Ibrahim confirmed the incident and said that some of the villagers with bullet wounds are currently taking refuge at the top of the mountains. He said no help, either from the police or military has come to those that were injured since the attack and that the sect men are believed to be preparing for a second attack. Continue… 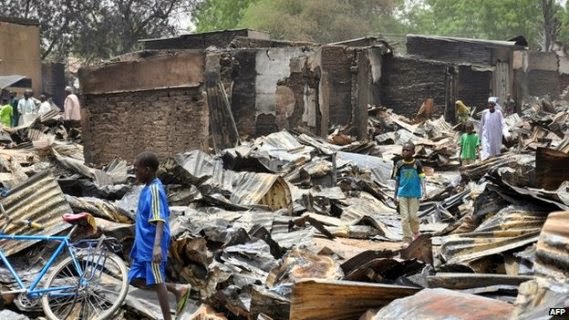 “As we speak now, I am still receiving distress calls from them, they were all crying and calling for help; no soldier or police official had gone there yet. The Boko Haram gunmen mounted their flags in Ashigashiya which is now like their headquarters. In last night’s attack, six churches were burnt, eight persons were killed and several others seriously injured. We cannot count the number of houses that were burnt in Chinene village of Chikide-Joghode-Kaghum ward. They also attacked Amuda village where one person was killed and several others injured. As I am talking to you now, the insurgents have mobilised at Izhaghathagwa mountain, planning on how to finish (kill) our people; that is why they have been calling for help before the gunmen climb up to them. We are calling on the military authorities in the state to quickly go up there and help us rescue those poor villagers, their wives and children before the imminent danger of the gunmen attack caught them up in the mountains,” he said. “We have a detachment of soldiers that were deployed to Gwoza but none of them cares to go behind the mountains, even though everyone hears the sound of the shootings there” he said

Ibrahim gave the names of some of those killed in Chinene village as Bulama Dajiba, Bulama John, Haruna Wadda, Bitrus Kurma, Haruna Kwatha, Haruna Waruda, and Shaibu Galva.
Meanwhile a military personnel who spoke anonymously to Premium Times said the flag hoisting took place in Ashigashiya village three weeks ago. He said the Military has been informed about yesterday’s attack.

The real reason we don’t hear about Paris Hilton anymore

Hope All Is Well: Buhari spotted at Health Control centre at a London Airport