Breaking: Another Bomb Blast Hits Abuja While Nigeria Qualifes For Second Round Stages , After a 3-2 Defeat by Argentina

While Nigeria was playing Argentina a while ago. There was a Bomb blast reported in Abuja.Chiamaka Oham, who was near the site of the blast, told the BBC: “We heard a really loud noise and the building shook, and people started screaming and running out.“We saw the smoke and people covered in blood. It was just chaos.”

Eyewitnesses at the scene described seeing body parts scattered across the area.

The area was packed with shoppers at the time of the blast, the BBC’s Hausa service editor Mansur Liman reports.Many cars outside the shopping complex were burnt out and many windows were shattered, he adds. 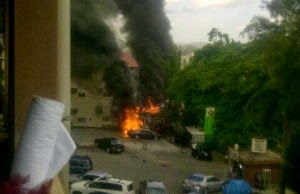 One man told the BBC his driver was killed in the blast: “I was in the complex when I saw that the ground was shaking. I saw my driver dead and a lot of casualties.” Smoke seen rising from the site of the blast, .The blast hit a busy shopping centre 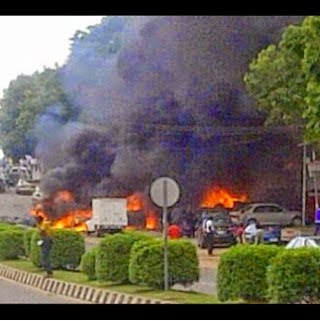 Manzo Ezekiel, spokesman for the National Emergency Management Agency, told AFP news agency: “You can see smoke billowing from the sky. It’s a very crowded place.”Police spokesman Frank Mba said he could not provide details of the nature or extent of the damage.“Our most important assignment now is to secure lives, secure the crime scene and actually carry out preliminary investigations,” he added.Boko Haram has staged previous attacks in Abuja, but most of its targets have been in the north-east of the country.In April, more than 70 people were killed in a bomb blast at a bus stop on the outskirts of the capital in an attack claimed by Boko Haram.The group also said it was behind a car bomb attack near a bus station in the suburbs in May, which killed at least 19 people and injured 60 others.The group has hit Abuja several times before, including an attack on the United Nations national headquarters in 2011.It has become a source of growing international concern since the recent abduction of more than 200 girls from a school in northern Nigeria.line

What People in Indonesia Do with Their Dead is Shocking, Bizarre Tradition.