Terrified passengers on a flight across Europe feared they were moments away from death after one of the plane’s engine’s failed in mid-air. After an emergency was declared by the flight crew, the plane’s ‘weeping’ pilot warned holidaymakers that they had six minutes before they would crash, a passenger says.

Travellers were ordered to put on their life jackets and brace for a water landing during the charter flight from Split, Croatia to Nantes, France. Continue… 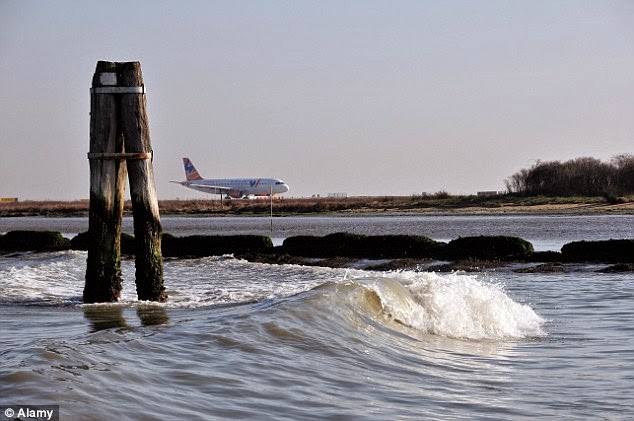 Tourist Benjamin Girard described the harrowing experience aboard the Europe Airpost flight, saying passengers were ‘crying and screaming’ in horror as the aircraft was in danger of crash landing in the Adriatic Sea on 23 August.
The drama ended when the Boeing 737 landed safely in Venice, Italy, and now the airline is downplaying the incident.
Mr Girard, who was travelling with his wife and daughters, said the ordeal began shortly after take-off when the pilot told passengers to prepare for turbulence.
He said: ‘Then people at the back of the plane said one engine had stopped working, and this was soon confirmed by the pilot. He said we would have to make an emergency landing in Venice, and joked it would be a great chance to visit the city.’
Passengers were not amused and the pilot soon told them to put on their life jackets and remove any jewellery.
Mr Girard said: ‘He said we would have to make a crash landing at sea and warned us there could be an explosion. Everyone was terrified, even the cabin crew. One steward was in a state of total panic and another just went pale and silent.
He added: ‘When the pilot next came on he was crying. He said we had six minutes before we would crash, but that we should not panic. People were screaming out at the back of the plane.’
After several terrifying minutes, the twin-engine aircraft finally ‘bumped down’ at the seaside Venice Marco Polo Airport with no injuries, Mr Girard added.
Europe Airpost acknowledged that there was ‘panic on board’ but insists passengers’ safety was not at risk.
A spokesman said in a statement: ‘The flight from Split to Nantes experienced an incident with an engine. This was identified by the crew who took the decision to land in Venice and inform the passengers.
‘It was a procedure practised by the crew, who landed the plane safely in Venice.’
Source: UK Daily Mail

First photo of Sudanese woman after her release yesterday