Photos: One dead from today’s fight between Okada men & thugs in Lekki 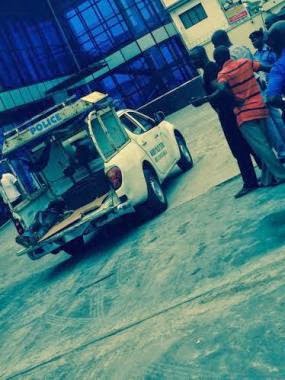 Apparently the fight between Okadamen, bus drivers and thugs today in the Lekki Phase 1 area of Lagos was more serious than we thought. Machetes were used and someone died.

A young man was struck in the back of the head with a Machette and was taken to the nearest place they could find, a lab, not a hospital. The lab called for an ambulance to take the injured man to a hospital and for 3 hours, no ambulance showed up. The guy eventually died possibly from loss of blood. Above is a pic of his body as it was being transported in a police van via Lekki-Ikoyi bridge

A MUST READ: 2014 Independence Day Broadcast by President Jonathan

Many reasons I want Obiano out – Peter Obi