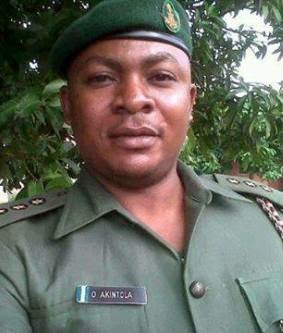 Very often we hear that soldiers in battle with the dreaded Islamic sect Boko Haram were killed, but we hardly get to see the fallen officers. Well, here are two of them. The officer on the left is Major Olalekan Akintola, aka Lokoso, he was one of the officers ambushed and killed by Boko Haram men last Wednesday night. The officer on the right is Lt Odushina Oluwafemi, he and his fellow soldiers were killed when their convoy was ambushed by Boko Haram after their GOC, Major General Abubakar Mohammed, made them make an unusual trip, his friends say.

Their deaths sparked a mutiny against the GOC. Y’all remember the story last week. The GOC has since been redeployed because of the incident.

Lt Odushina Oluwafemi attended Air Force Secondary School Ikeja, and has served as part of the UN peace keeping forces in Darfur. He went to Pakistan for additional training course and was only deployed to Maiduguri in March 2014 where he met his untimely death. May their souls rest in peace.

As Another Civil War Looms By Chido Onumah