Did Beyonce faked her pregnancy?

We absolutely don’t believe this story because what sister would do that to her own blood? But let’s carry it for entertainment purposes….:-). According to this week’s In Touch magazine, Solange is writing a Tell-All book, and getting $20m for it. Below is what they wrote:

From cheating to abuse to fake baby bumps, Solange could reveal what’s behind rumors that have plagued the famous family. . .

Solange is growing increasingly fed up with playing second fiddle to Beyonce, 32, and sources believe she’s ready to spill the beans on everything from their estranged father to how Beyonce turns a blind eye to Jay Z’s womanizing. “Solange was always in the background while Beyonce was the golden child,” says a family friend. “She’s sick of being held down and she’s ready to fight back.” 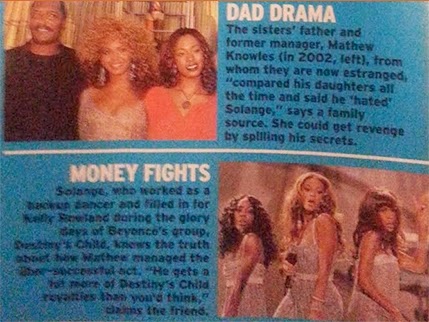 Flavour shows off his butt on social media

Don’t let any soul isolate you from your family,

I’m a tomboy not a lesbian – MTN hitmaker winner O.V