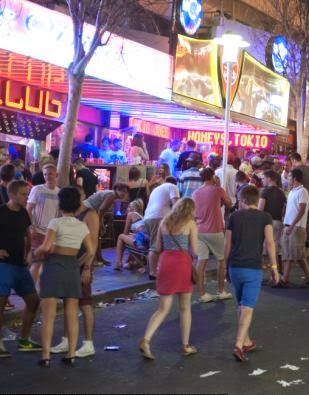 A British girl was filmed performing sex acts on 24 men at a nightclub in Majorca’s notorious party capital, Magaluf in Spain.

The 18 year old girl (pictured right), whose identity is being hidden, was told by the organizers during an event at a bar called Alex’s Bar that she would win a ‘holiday’ if she participated in a game. But the prize turned out to be a £4 cocktail called ‘Holiday’ made from gin, vodka, peach schnapps, blackcurrant liqueur and fruit juice.

The girl was cheered on by the crowd as she went from one man to the other, asking them to take down their pants and performed the sex act.

“The girl was being encouraged to drink more and more and was told she would win a ‘holiday’ if she took part in this game. Unfortunately the ‘holiday’ turned out to be the name of a cocktail. I feel sorry for her now. She must feel awful.’ Someone who witnessed the incident told The Sun

A 2-minute footage, which also showed several holidaymakers taking photos of the act with their phones, was later posted online, causing outrage. The police has launched an inquiry into the incident. Watch the video after the cut…

Jay-Z cried when mum told him she’s gay: ‘She was free’